The No Internet Song (Synth Mix) 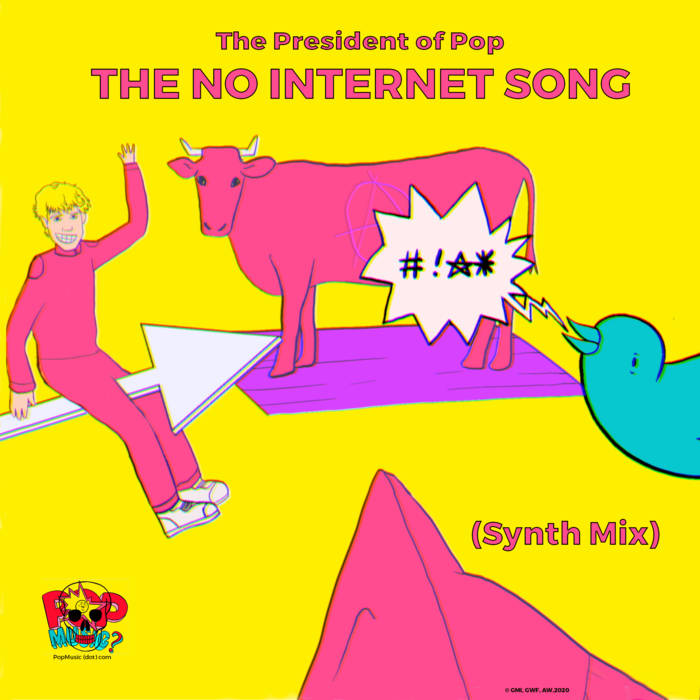 Spend one hour a day iLone. ‘iLone’ means WITHOUT your phone. Leave Your Phone at home, and leave your home iLone, for one hour a day.

The President of Pop, newly arrived on Earth from his home on Asteroid P-420, brings a challenge to the people of Earth, accompanying his new video "The No Internet Song (Synth Mix)":

“Spend one hour, every day, walking outside, with no phone or headphones. See what your mind thinks when it's not being inundated by algorithmically inspired idiocy.

Bonus points? Go to sleep with your phone in another room. See what you think without your phone. See what you dream, what you wake up thinking about, imagining, or dreaming of...

It doesn't count if you your phone is near you. Knowing you could turn it on distracts you even more.

Each time you walk or go to sleep iLone you’ll hear your own mind again...something that's impossible in this torrent of tweets we live in, the endless flotsam of gerbil-brain-sized catch phrases, reductio ad absurdum advertisements, miniaturised mental morsels, and ridiculous fact-less ideas repeated so often they are believed to be facts (but they’re not!).

Think for yourself, which starts with...thinking. Which starts with a one hour walk, iLone, every day, and sleeping with your phone in another room, every night.

FIGHT AGAINST THE ALGORITHMS. LISTEN TO YOUR OWN HEART'S RHYTHMS!

"The No Internet Song v2 (Google-ized by Google's Eyes v2)" is available ONLY at PopMusic.com, for now, but it MAY be on Spotify a bit later. (“The problem with Spotify,” opines Pop’s new President, is that Spotify's algorithms, in a similar way to social media, also shrink brains, spirits, hearts and minds. For example, when you choose to listen to a few songs in one style, you can’t escape your choice. You're inundated with endless songs that kinda sorta sound like the ones you’ve already heard. NO! Seek adventure. Hear NEW sounds. Sounds UNlike what you've heard before.)

Join the President of Pop at PopMusic.com and forget social media! :D

Another option? (Sorta.) Join the P.o.P's–the President of Pop's–f&*$ social media, which he MIGHT use for a while, but only to encourage people not to use social media! Irony of ironies...)

The first version of "Google-ized by Google's Eyes, The No Internet Song", was mixed on Earth. This version, "The No Internet Song v2 (Google-ized by Google's Eyes v2)", was mixed in the starlight–literally–on The President of Pop's spaceship going back to his home on Asteroid P-420, where he lives iLone, and alone..."except the great granddaughter of The Little Prince's rose...long story, don’t ask...." he says, a dreamy look in his faraway eyes.

Lyrics for "The No Internet Song v2 (Google-ized by Google's Eyes v2)" are available if you hit the magic button (closed caption) here on Youtube. They're also written out at PopMusic.com (once the song is live there, 10 January).

Q: Where are you REALLY from?

A: Asteroid P-420. It's the third-dimmest star in the sky tonight. Look for it. You can easily miss it. (That’s the magic–which of course is a bit tragic!)

Who are you REALLY?

Weirdly, my name really IS The President of Pop. My title is His Exalted Majesty, Most High. It's also "Peasant scum." Y’see, as I’m the only one on my planet, I have to wear a lot of hats.

Reality is what you imagine is real. Imagination, however, is the thing which enables you to imagine “reality”. Which sounds more important to you?

What inspired you to write "The No Internet Song v2 (Google-ized by Google's Eyes v2)".

Inspiration is a force of thunder from the universal spirit, whispering in our ears. I was afflicted with inspiration to write "The No Internet Song v2 (Google-ized by Google's Eyes v2)". Not my choice. I'd rather have been catching moonbeams in an old fruit jar. Speaking of which, Asteroid P-420 is really far from the sun, yet I'm so acclimated to it, sometimes I get star-burned, and my skin turns a whiter shade of pale, which doesn’t leave me with very good vibrations.


When I go and see the ocean’s roar
Outside my door
I want much more
But you stay inside stuck on your phone
All alone
It makes me want to scream!

When I laugh and sing and jump around
I’m sometimes upside down
Like a clown
But you sit there clicking on your mouse
Inside your house
What does your life mean?

There’s a place that I heard of
Where you say what you mean
Memes on a screen
Don’t mean anything
There’s a place that I heard of
That’s in the third dimension
Where people sometimes really
Even pay attention
Where you don’t have to pop-up,
Well you can just barely mention!
And no one has to suffer through
Annoying click-bait tension
And your friends are three-dimensional
And they’re warm too (they’re not stuck on a screen)
And you don’t have to worry about Facebook’s censors
You can say precisely what you mean

“It’s violated our terms of service, and we’ve deleted you, cuz I’m in charge of everything, I’m Mark Zuckerberg...”